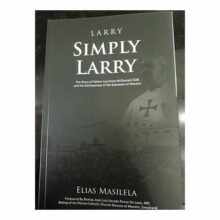 Summary:
Larry – Simply Larry tells the story of Fr Larry McDonnell, an inspiring Irish Salesian Priest and the Headmaster of Salesian High School in Manzini, Swaziland. For more than two decades, Larry was instrumental in the growth and development of hundreds of Swazi boys, as well as many from South Africa, Namibia and Zimbabwe who sought refuge in Swaziland during the apartheid era. Many of the boys whose lives he touched, directly and indirectly, are now prominent policy, political and business leaders in South Africa and the region. He also played a crucial, though largely unsung, role in the liberation of South Africa. Salesian was also an academic refuge for many South African, Namibian and Zimbabwean teachers. At various times the school harboured operatives of uMkhonto we Sizwe (MK), Swapo and the PAC; such as Stanley Mabizela and General Keith Mokoape of MK – a most recent Luthuli Awardee in Silver, both ANC; Arthur Pickering of Swapo as well as Rosette ‘RB’ Nziba and Dini Sobukwe of PAC, respectively.

The key period in this account is from 1970, when Larry arrived at the School, to the mid-1990s, following his tenure as Headmaster and his retirement to technical education. As a deeply religious person, caught up in struggle politics while trying to give the boys, in his care, the best possible start in life. Larry’s roots in the Irish struggle for liberation from British rule and in the trauma of the 19th-century Potato Crisis, gave him an acute consciousness of South Africa’s liberation process. The book explores the parallels between the Irish, South African and Swazi histories, covering aspects of education, family, religion, culture, governance as well as politics.

Both tribute and portrait, the book takes the form of a wide-ranging conversation, drawing on interviews with, and the recollection of, a range of participants – fellow Salesian Priests, former Teachers, Salesian Old Boys and Family members – to build a richly detailed mosaic that illustrates the foundational principles and themes by which Larry has lived his illustrious life.
His influence respects no borders